Becker wins a Tribute to Al Hinds thriller in Placerville 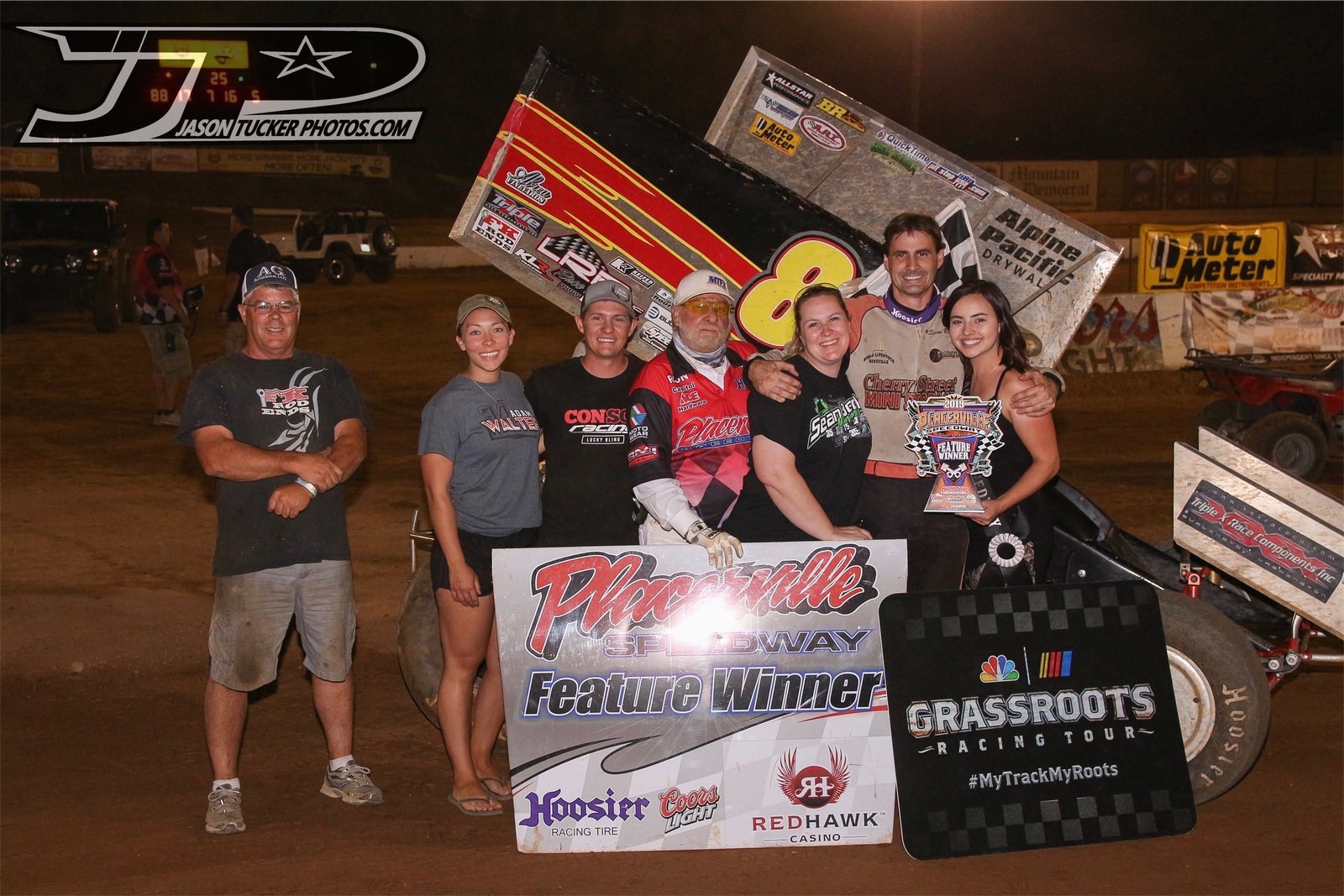 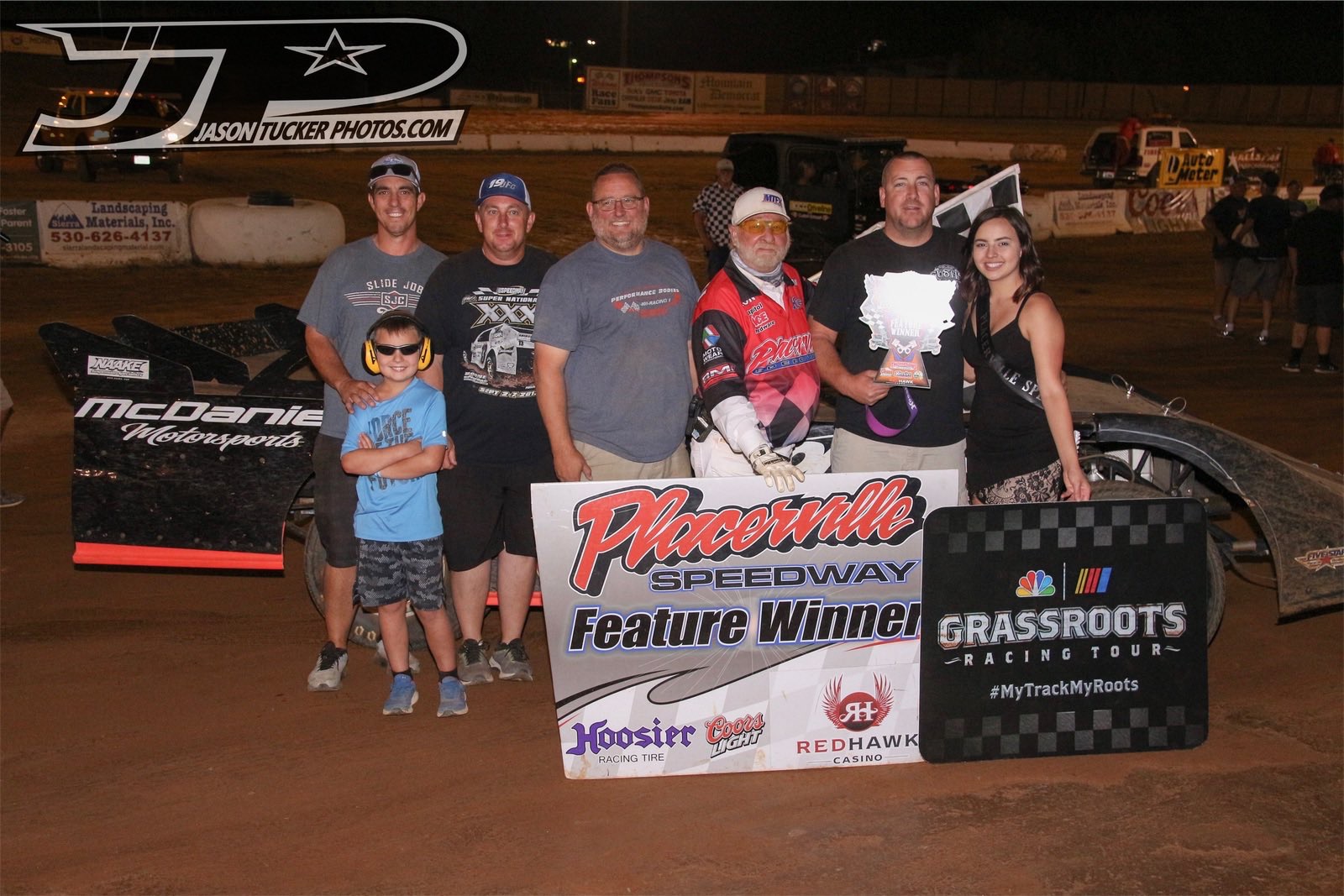 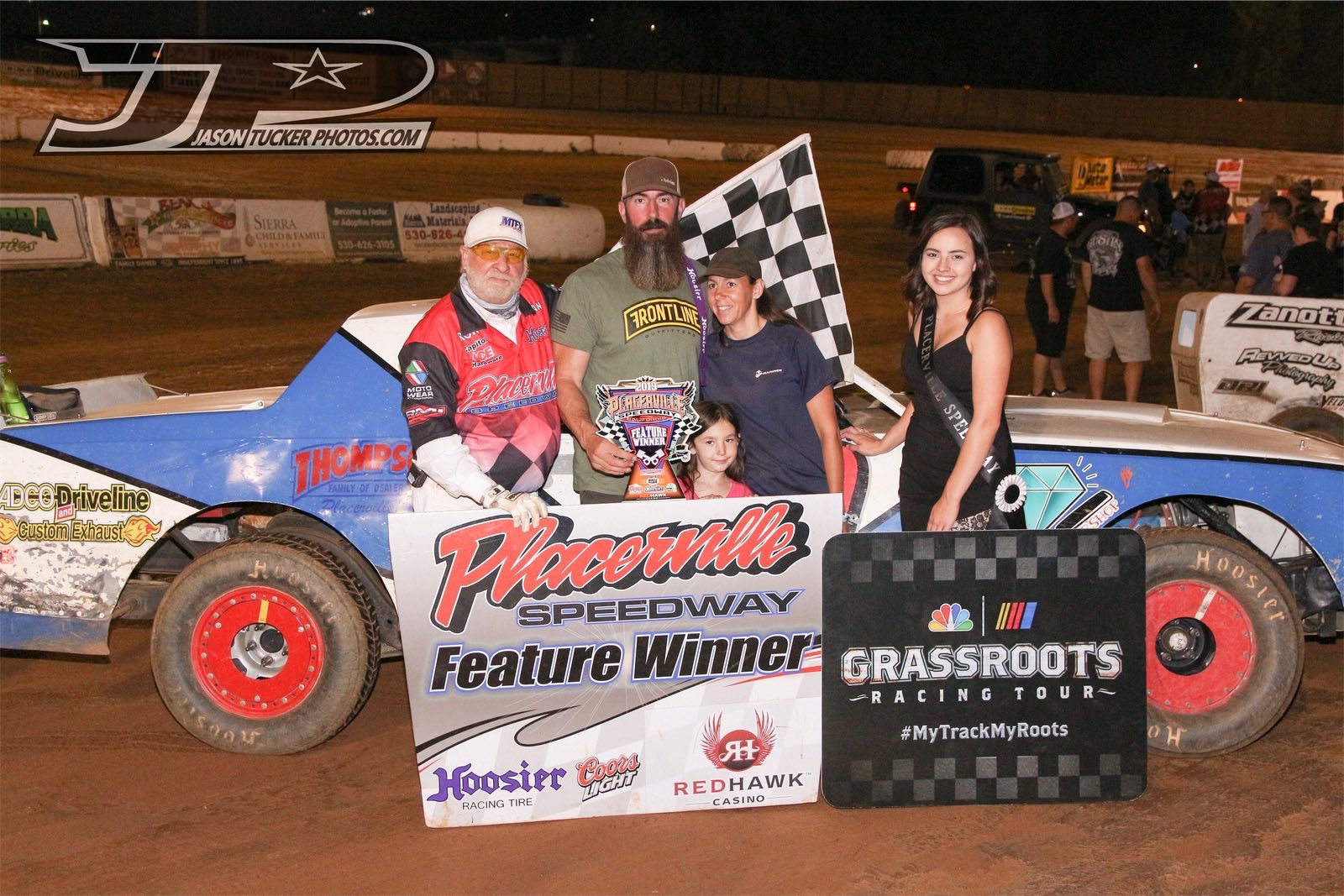 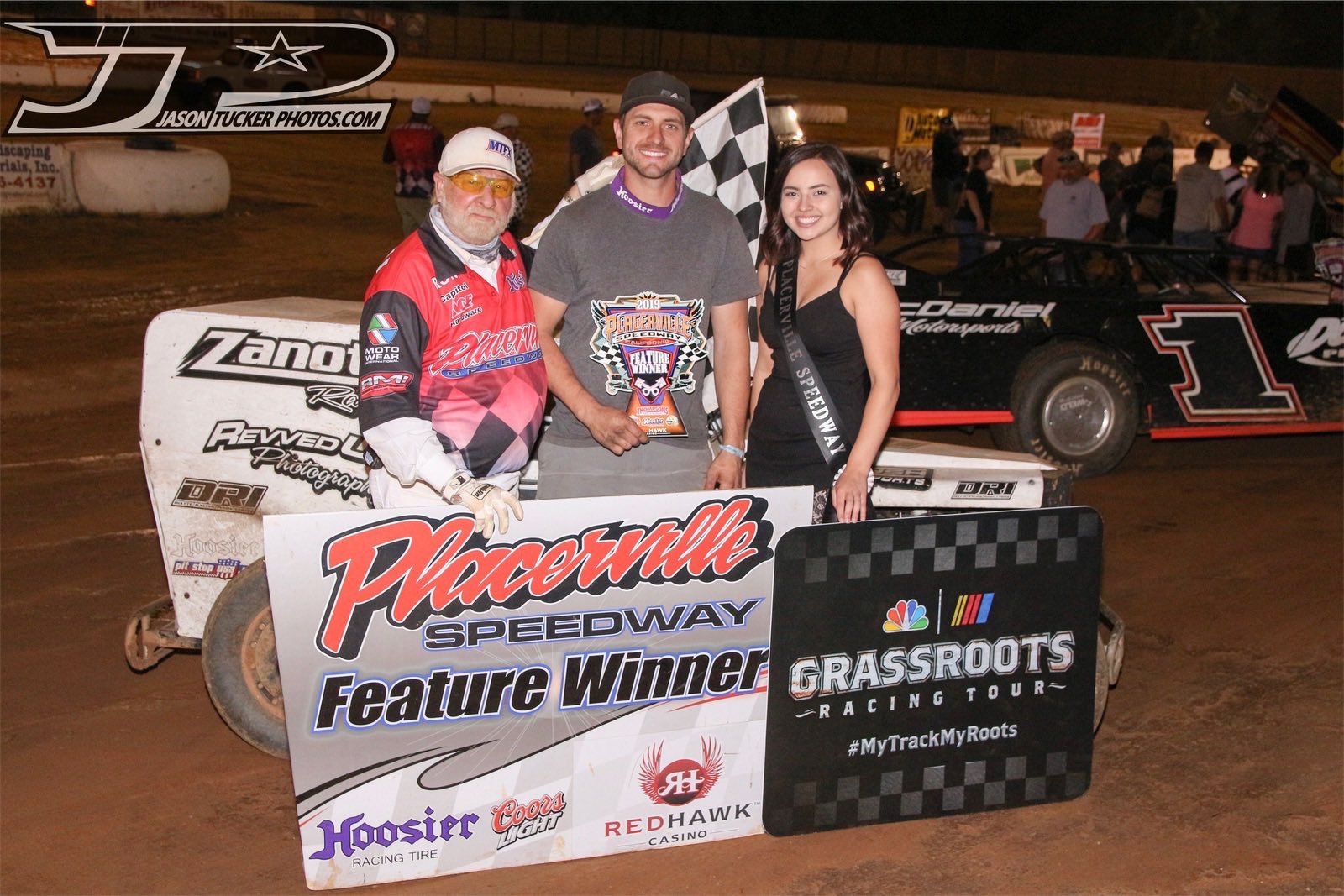 Placerville, CA – July 13, 2019…An exciting night of grass roots dirt track racing at the Tribute to Al Hinds on Saturday culminated with Roseville’s Sean Becker scoring his 25th career Winged 360 Sprint Car victory at the Placerville Speedway. His entertaining triumph aboard the Dan Monhoff owned M&M Structures No. 88N machine moved the decorated driver into a tie for fourth all-time in Winged 360 wins at the El Dorado County Fairgrounds facility.

Solid racing was seen throughout the night in all four divisions, as we honored the late promoter who helped mold the quarter-mile into one of the premier venues in Northern California. Also claiming wins during the 16th annual Tribute to Al Hinds were Ryan McDaniel with the Ltd. Late Models, Dan Jinkerson with the Jay’s Mobile Welding & Fabricating Pure Stocks and Shawn Jones with the Nor-Cal Dwarf Car Association. A total of 70 cars filled the pit area during point race number 10 on Saturday.

The 25-lap Thompson’s Family of Dealerships Winged 360 feature got off to a rocky start as the red flag came out for Cole Macedo and Blake Carrick, who got upside down in between turns three and four. Point leader Andy Forsberg was also involved in the melee and went to the work area, before restarting from the rear. Forsberg’s nearest rival in the standings Kalib Henry started from the pole in the main event and looked to get the jump when the green came back out, but third starting Tony Gualda had other ideas.

Gualda, who had spent the week competing at Northwest Speedweek, sliced to the inside of Henry and snagged the early lead of the race. The action was fast and furious after a bit of track prep prior the feature, which gave drivers multiple lines to use. Race fans were ultimately treated to several non-stop laps of exciting competition on the red clay bullring. Sean Becker had found the high side to his liking and rocketed into second, before hounding the rear bumper of Gualda’s machine. With lapped traffic in play drivers raced high and low navigating through the slower cars.

On lap 11 the hard charging Becker blasted into the lead, before the caution waved on lap 17 to let everyone catch their breath. When going back green it became the Becker and Shane Golobic show, as the duo raced close together and kept fans on the edge of their seats. While Becker remained upstairs beating down the cushion, Golobic ran the patient low line in his bid to take over the point. With just a couple laps left Golobic finally got the run he needed and inched of Becker to grab the top spot. Just after that however the yellow waved for a stalled car in turn two.

The caution flag saved Becker’s lead and he would go on to lead the final two circuits for his second Placerville Speedway victory of the season. By earning his 25th career Winged 360 triumph at the track it tied him with CJ Humphreys and Roger Crockett for fourth on the all-time win list. Golobic’s valiant run ended in the second spot, with Gualda, 15th starting Andy Gregg and Henry rounding out the top-five. Gregg should be commended for an exciting run in the feature, as he earned the Hard Charger Award in just his third start of the season.

Filling out the remainder of the top-10 were Bobby McMahan, Jimmy Trulli, Shane Hopkins, Andy Forsberg and Bubba Decaires. Four heat races were held during the night and were picked off by Cole Macedo, Kalib Henry, Andy Forsberg and Blake Carrick. Tony Gualda began the night by setting his fifth ADCO Driveline and Custom Exhaust Fast Time of the season. His lap of 10.913 topped the solid 26 car field that signed into the pit area.

Ryan McDaniel returned to action with the Ltd. Late Models on Saturday and proceeded to dominate the 20-lap feature for his second win of the 2019 season. Tyler Lightfoot and Wayne Trimble shared the front row in the eighth main event of the season for the Late Models. McDaniel started outside row two and wasted no time taking over the top spot. Despite McDaniel having his way out front the racing behind him remained entertaining for much of the contest with cars running high and low on both ends of the speedway.

Later on the groove began to move lower on the track and McDaniel raced off to take the checkered flag, earning his all-time leading 34th career Ltd. Late Model win at Placerville Speedway. Wayne Trimble brought home a season best finish in second, followed by Dan Brown Jr., Matt Davis and Paul Gugliamoni in the top-five. Matt Davis claimed the lone heat race during the night.

The Jay’s Mobile Welding & Fabricating Pure Stocks once again put on an exciting display of racing in their main event. Dan Jinkerson has been the dominant force in the division and he showed that once again by racing to his fifth victory of the season after starting from row four. The crowd certainly got their monies worth in the 20-lapper as side-by-side racing was prevalent throughout the entire race. Nick Baldwin and Scott Grunert shared the front row and had several entertaining battles during the feature.

At one point in the race the top-five cars on the speedway were pack racing like it was Talladega, just on a smaller scale. Dan Jinkerson raced hard with his brother Kevin for several laps as well, before he was able to slice through the traffic to take over the lead. Baldwin gave it one last run to try and track down the leader, but Dan Jinkerson crossed under the Ron Stahl checkered flag to claim his 26th career Placerville Speedway victory, tying him for fourth all-time with Kent Kilroy.

Baldwin, Kevin Jinkerson, Jason Palmer and Grunert rounded out the top-five in the A-main. The two heat races contested were captured by Jason Palmer and John Ewing. Saturday’s Tribute to Al Hinds marked the 10th point race of the season for the Jay’s Mobile Welding & Fabricating Pure Stocks.

The Nor-Cal Dwarf Car Association feature continued the trend for the night with an exhilarating 20-lapper, which ended in a final lap battle between brother in laws’ Shawn Jones and Ryan Winter. The main event started out with brothers Josh Wiesz and Ben Wiesz leading the field down to green. Early on perennial favorite Ryan Winter came to a stop to bring out a caution, forcing him to the rear. Despite several stoppages, including a red flag at one point, the racing remained thrilling in-between.

Winter charged through the field with authority and was already back to the top-five in no time at all. Eleventh starting Shawn Jones had found a nice groove upstairs and as the race wound down looked to battle it out with Winter, who had taken over the lead just past the halfway point. With Winter running down low Jones navigated the famed Placerville cushion and when the white flag waved the pair pulled even.

Going into the final set of corners Jones got the run he needed and shot past Winter to claim his all-time leading 19th career Placerville Speedway Dwarf Car win. Winter, Ben Wiesz, Tim Fitzpatrick and Mike Grenert completed the top-five. Rounding out the top-10 were Colby Wiesz, Mike Reeder, Ryan Plexico, Kevin Bender and Sam Wren. Three heat races were held on Saturday and went to Winter, Jones and Shawn Whitney. As always, the Nor-Cal Dwarf Car Association brought a stout field to the speedway with 24 cars strong on hand.