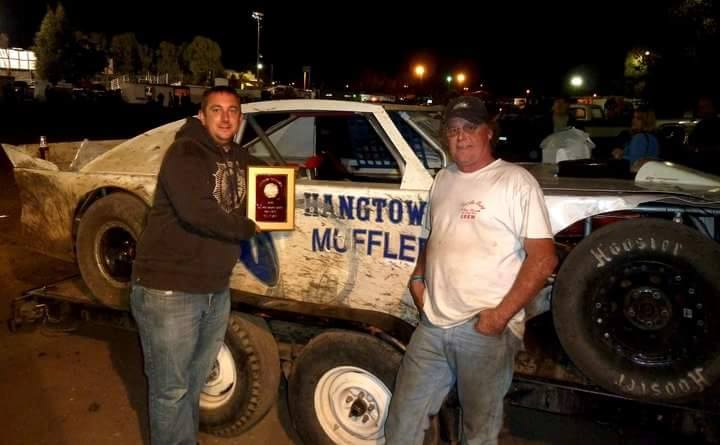 Placerville, CA – The Placerville Speedway will put a cap on its slate of action for the month of May this Saturday night when championship point race number five invades the familiar red clay quarter-mile.

The Thompson’s Family of Dealerships Winged 360 Sprint Cars, Ltd. Late Models, the Jay’s Mobile Welding & Fabricating Pure Stocks, Mini Trucks and Vintage Hard Tops are all set to put on a show for the fans during the fifth point race of the season. Following this Saturday’s program, the track will go dark for the next two weeks, before resuming things on June 1st with “Dads and Grads Night.”

This Saturday’s show will also double as the fourth annual “Bryan Carnett Clash.” Carnett was a true fan of the stock car divisions at Placerville Speedway while racing, owning and sponsoring both Pure Stocks and Limited Late Models throughout the decade that he spent at the track.

Close and torrid point battles seem to be a theme during this early season thus far. On the Thompson’s Family of Dealerships Winged 360 Sprint Car side of things just a trio of points separate the top-three drivers in the standings. Hollister’s Tony Gualda has shown impressive speed in 2019 and has been knocking on the door of victory lane the first few events. He goes into Saturday holding a slim two-digit advantage over a two-way tie for second between last week’s winner Andy Forsberg of Auburn and Mather’s Kalib Henry.

A nice addition to the Winged 360 roster this year has been 1982 Placerville Speedway Rookie of the Year Bobby McMahan, who is coming off a fourth-place finish last week. The Elk Grove veteran currently ranks fourth in points, with 16-year-old female racer Jodie Robinson rounding out the top-five. Robinson, the daughter of former track champion David Robinson Jr., has filled into her new ride nicely and is coming off a seventh place run last Saturday. Completing the top-10 in the standings are Calistoga’s Mike Benson, Cameron Park’s Shane Hopkins, Napa’s Chris Masters, Elk Grove’s “Bubba” Decaires and Shingle Springs’ Justin Johnson.

With the Ltd. Late Models last weeks winner Ryan McDaniel finds himself atop the standings by 12-markers over Tyler Lightfoot. Round one winner Ray Trimble, Jay Norton and Dan Brown Jr. round out the top-five. Filling out the top-10 going into the annual Carnett Clash are Eddie Gardner, Bobby Hogge, Matt Michelli and Randy Shafer.

Adult tickets this Saturday will cost $15, while seniors 62 plus, military and juniors 12-17 will be $13, children 6-11 are $6, kids five and under are free! Tickets can also be purchased online by clicking https://www.universe.com/events/2019-placerville-speedway-championship-pts-race-5-the-carnett-clash-tickets-placerville-JPDZCB

The pit gate will open at 2pm, with the front grandstand gate opening at 3pm each night. A happy hour will be offered from 4pm-6pm in the grandstands featuring discounted Coors Light and Coors Original at the beer stand. Drivers meeting will be held at 4:30pm, with cars on track for wheel packing at 5. Hot laps, ADCO Driveline and Custom Exhaust qualifying and racing will follow. Live music will be performed from 4-6 in the grandstand area